With 1 Week to World COPD Day,
COPD Support Ireland Launches its “Save your Breath” Campaign
& COPD Manifesto for Government

– Call for COPD screening for high-risk groups, pulmonary exercise and outreach programmes in hospitals, a national COPD helpline and greater access to medical cards for people with COPD –

Date of issue: Wednesday November 11 2015, Dublin
With one week to go to World COPD Day (Wednesday November 18 2015), COPD Support Ireland, the national umbrella body for local COPD (Chronic Obstructive Pulmonary Disease) support groups, today launched its annual “Save Your Breath” campaign and set out 5 key pledges it is urging political parties to sign up to ahead of the next General Election. The publication of the COPD Manifesto for Government set out the following demands:

The awareness campaign, which sees a nationwide COPD health check-in tour offering free screening, was launched by Deputy Jerry Buttimer, Chairman of the Oireachtas Committee on Health & Children and TV3 presenter, Anna Nolan. An estimated 380,000 people are thought to have COPD1, with numbers alarmingly on the rise2. The campaign is kindly supported by A. Menarini, Boehringer Ingelheim, GSK and Novartis.

COPD Support Ireland will be undertaking a COPD health check-in tour visiting key locations nationwide from November 16 to 20—details of venues can be found at www.saveyourbreath.iewhere people can also complete on online COPD interactive health check-in and download a handy COPD pocket guide. People worried that they may be at risk, particularly those over 35 years and who have persistent breathlessness, coughing with phlegm and chest infections, or who are current or former smokers, or who have a family history of lung conditions, are urged to avail of a free COPD spirometry breathing test.

People previously diagnosed with COPD are encouraged too to come along to take advantage of inhaler reviews, breathing technique support, and general health and well-being advice. Guidance on nutrition will also be provided, including a free nutrition information booklet, as good nutritional care helps to improve outcomes for people with COPD.

TV3 presenter, Anna Nolan, has joined the “Save Your Breath” campaign as ambassador and is urging people to get to know the “ABC” of COPD:
“The ‘Save Your Breath’ campaign is all about making people aware of COPD, or bronchitis or emphysema as we might more often know it. The sad reality is that many people have no idea that they have the disease and are perhaps dismissing the symptoms as normal wear and tear. But symptoms of persistent cough with phlegm, chest infections and breathlessness are not normal and so I would really implore people to get to know the ‘ABC’ of COPD—Avoid the risks, Be aware of the symptoms and Consult your GP for a simple spirometry breathing test. Don’t let COPD creep up on you and make your life a misery—do something about it today.”

Damien Peelo, Executive Director, COPD Support Ireland, believes that by implementing its COPD Manifesto for Government, hospitalisation for many people with COPD could be avoided:
“The focus of our “Save Your Breath” COPD Manifesto for Government, which has been developed by our members, is on maintaining people’s health for longer, through early diagnosis in primary care, and by keeping people out of acute hospitals through COPD outreach and pulmonary rehabilitation exercise programmes. There is also a significant and ongoing cost associated with living with COPD, due to the burden of prescription and non-prescription medication, oxygen therapy, exercise rehabilitation, housing adaptations, transport, and so on, which is why it is vital that the condition be recognised as a long-term illness and people afforded greater access to medical cards. Furthermore, it is clear that people need access to expertise at the end of a phone which is why we are calling for the establishment of a national COPD helpline to provide information and support to people concerned about COPD.”

Deputy Jerry Buttimer, Chairman of the Oireachtas Committee on Health & Children, comments that the Government is committed to listening to people with COPD:

“Being diagnosed with COPD clearly has consequences for the person concerned, from the burden on their health and quality of life, to whether they can maintain a job, carry on with their hobbies and leisure pursuits, or continue to live the life that they have previously enjoyed. I am extremely conscious of the huge health burden that COPD imposes on our society and note the publication today of COPD Support Ireland’s COPD Manifesto for Government. I would like to assure the members of COPD Support Ireland of my support and I will ask Government Ministers to address these concerns and to provide the appropriate support.”

Professor Tim McDonnell, Consultant Respiratory Physician, St Vincent’s University Hospital, is encouraging people to listen to their bodies and to get tested:
“Last year, just over one in five of those tested nationally as part of COPD Support Ireland’s screening tour were referred to their GP for further examination on the basis of abnormal spirometry. Yet more than two-thirds of these had already had symptoms but had not sought medical advice. I would urge people not to ignore warning signs, but to seek medical advice. Early diagnosis of COPD means that you can start to get treated straightaway and potentially avoid some of the more serious effects of the disease.”

Saving Your Breath: Remember the “ABC” of COPD

COPD arises principally due to smoking and is where the airways of the lungs are narrower than normal, leading to airflow obstruction and difficulty breathing. It is the fourth most common cause of death in Ireland after lung cancer, heart disease and stroke3. In fact, Ireland has amongst the highest rates of death from COPD in Europe4 at almost 2,000 people in 20145, with one person dying on average every five hours, and the highest rate of avoidable hospitalisations for COPD in OECD countries6.

In a follow-on activity to the “Save Your Breath” campaign, and underlining the importance of exercise in combating the disease, COPD Support Ireland will be supporting a fundraising charity cycle from Dublin to Galway over two days in May 2016. Cyclists interested in signing up can find out more at www.copd.ie.

11.11.2015.
TV presenter, Anna Nolan (centre) pictured with Women with COPD, Angela Shakil, Bray (left) and Helen Duffy, Baldoyle (right) at the launch of COPD Support Ireland’s “Save Your Breath” campaign, coinciding with World COPD Day on Wednesday November 18. As part of a campaign to raise awareness of Chronic Obstructive Pulmonary Disease, COPD Support Ireland will be undertaking a nationwide COPD health check-in tour offering free screening from November 16-20, while people can also undertake an online COPD assessment at www.saveyourbreath.ie. An estimated 380,000 people are thought to have COPD, with numbers alarmingly on the rise. The campaign is supported by A. Menarini, Boehringer Ingelheim, GSK and Novartis. Pic. Robbie Reynolds 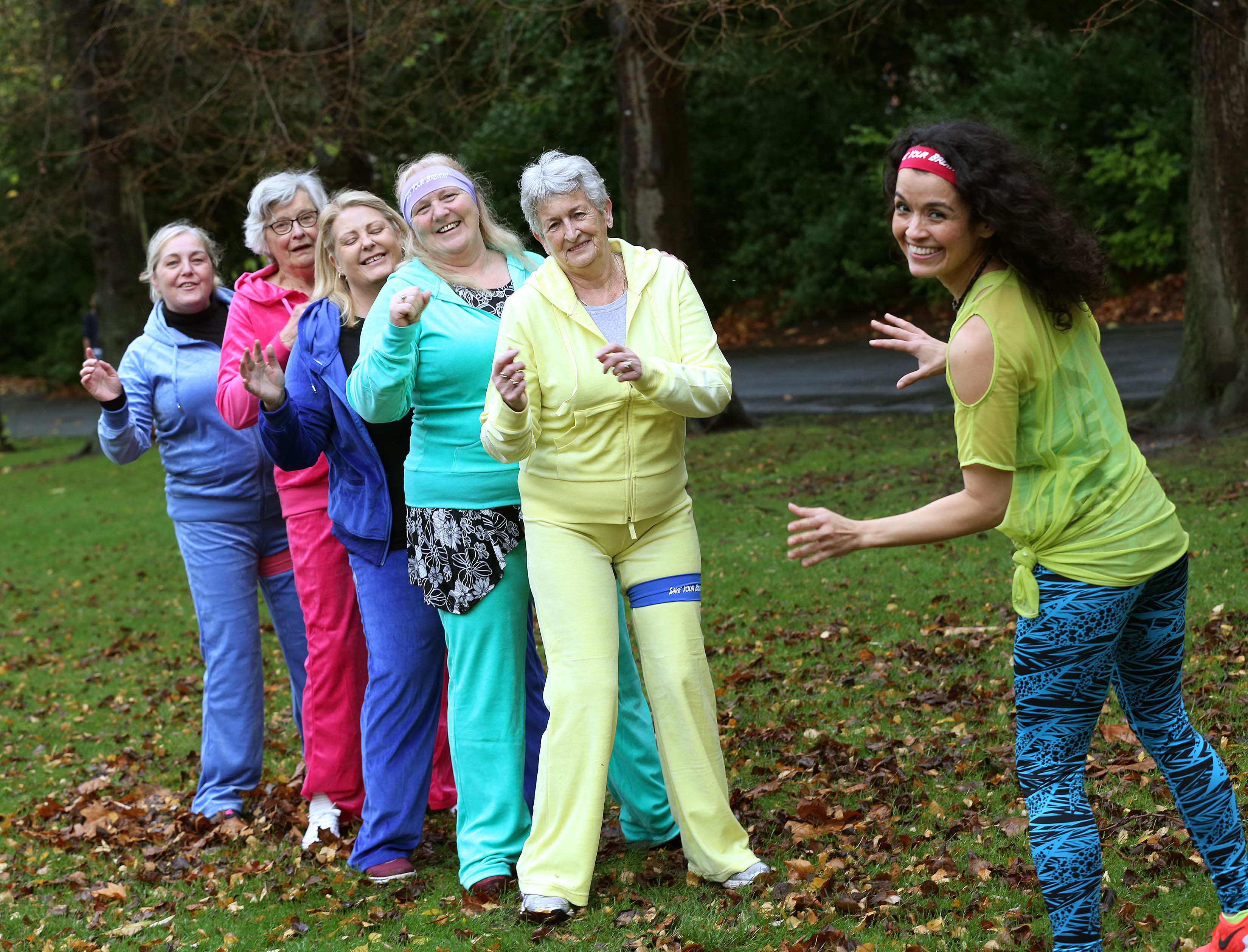 11.11.2015.
Paula Newman, Crumlin (left) Janet O’Leary, Loughlinstown, Letitia Swardt, Clondalkin, Anna Nolan, Helen Duffy, Baldoyle and Angela Shakil, Bray (right), at the launch of COPD Support Ireland’s “Save Your Breath” campaign, coinciding with World COPD Day on Wednesday November 18. As part of a campaign to raise awareness of Chronic Obstructive Pulmonary Disease, COPD Support Ireland will be undertaking a nationwide COPD health check-in tour offering free screening from November 16-20, while people can also undertake an online COPD assessment at www.saveyourbreath.ie. An estimated 380,000 people are thought to have COPD, with numbers alarmingly on the rise. The campaign is supported by A. Menarini, Boehringer Ingelheim, GSK and Novartis. Pic. Robbie Reynolds 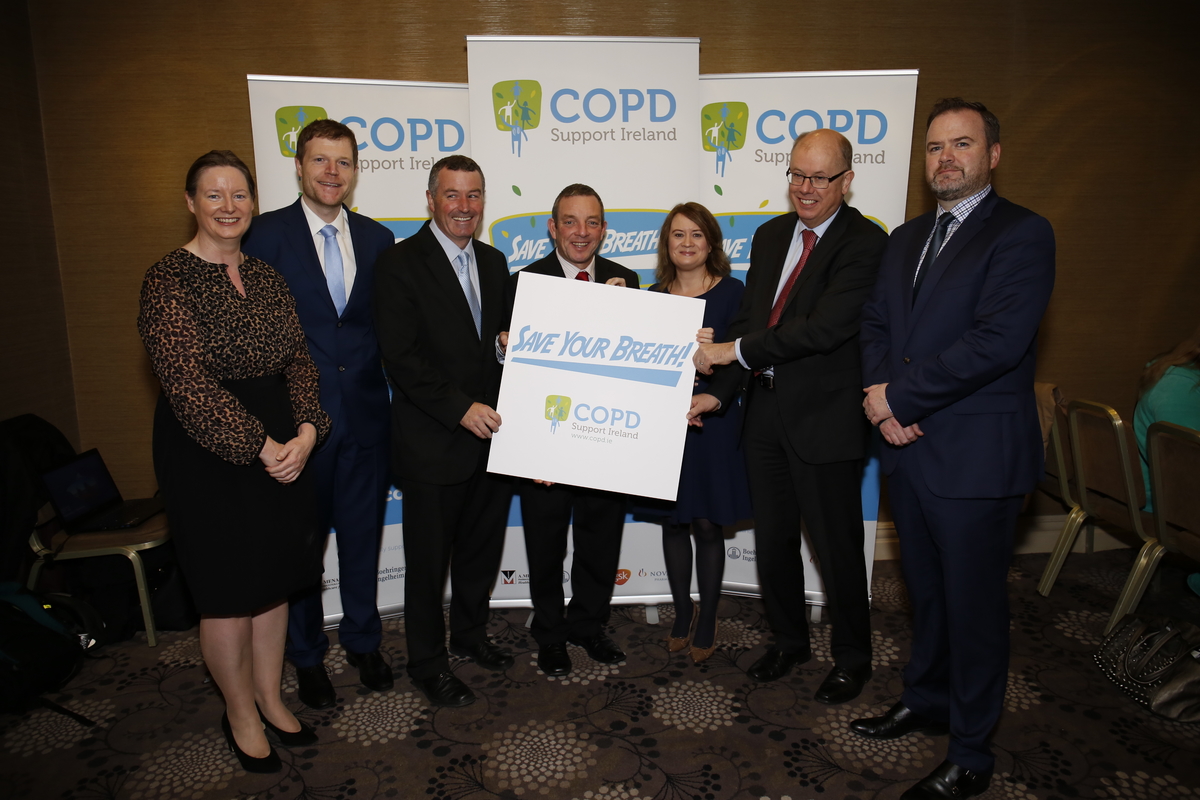